We have already discussed the rectifier circuits and half-wave rectifier circuit in detail in our previous tutorials. From those tutorials, we got to know that there is a vast difference in the characteristics and efficiency of different rectifiers.

Now in this tutorial, we will learn about the types, characteristics, and properties of a full-wave rectifier in detail.

What is the Full Wave Rectifier?

A Full wave rectifier is defined as “a type of rectifier that converts the alternating voltage into pulsating direct voltage using two crystal diodes that conduct current alternatively. But unlike half wave rectifier, it uses both cycles of the input voltage. For this AC to DC conversion process (rectification), it uses 2 diodes.“

This rectifier acts as a heart of circuitry which allows the sensors to attach to the RCX in either polarity. In this rectifier, the full-wave rectification process is achieved by using two crystal diodes. During the positive as well as the negative half cycle of input AC, the two circuits are employed to obtain the same direction of current flow in the load resistor.

As we have mentioned in starting, this rectifier is further classified into 2 types namely: Center Tap Full-wave Rectifier and Full-wave Bridge Rectifier. Each of these has its own working operation and features. We have covered these two rectifiers in detail below with working and properties. Focus on circuit diagrams and waveforms for a better understanding of each rectifier.

To better understand the circuit, we recommend going through our detailed article on PN Junction Diode

A Center Tapped Full-wave Rectifier Circuit employs a tapped transformer with secondary winding AB tapped at the center point C, and two diodes D1  and D2 connected in the upper half and the lower half portion of the circuit.

This rectifier is widely used in the vacuum tubes and thermionic valves.

The circuit diagram of the center tap full-wave rectifier circuit with waveform is shown in the below figure. If you follow the direction of the arrows in the circuit closely, you will notice that the alternating voltage Vin appears across the terminals AB of the secondary winding of the transformer when the AC supply is switched on. 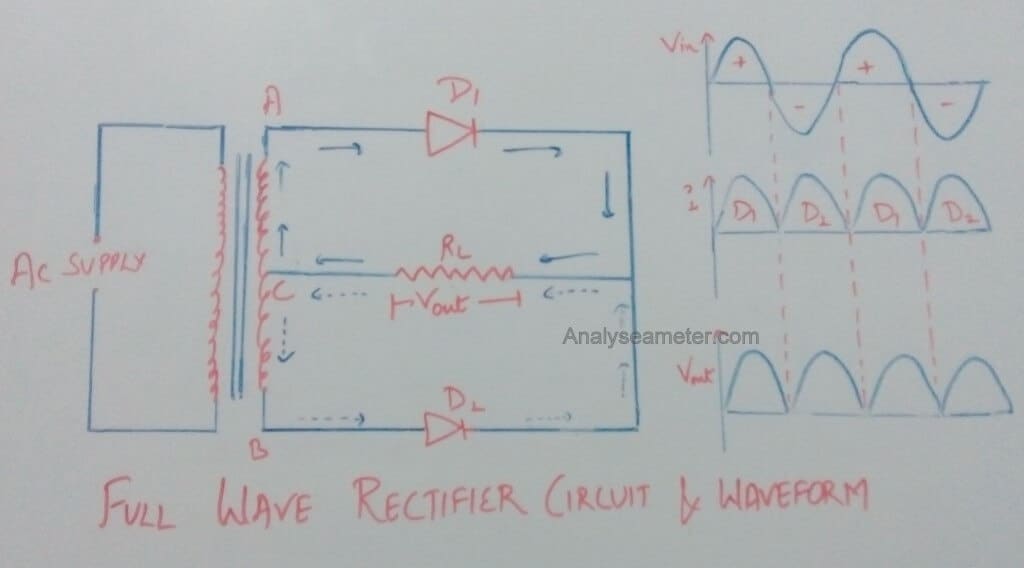 During the positive half cycle at a given voltage, end A of the transformer becomes positive while end B becomes negative. This makes the D1 diode forward biased and the D2 diode reverse biased. Due to this reason, only the diode  D1 conducts current while D2 does not conduct current.

As shown in the above figure, the current starts flowing through diode D1, and output voltage Vout is measured across load resistor RL. This means current flows only in the upper portion of the secondary winding of the transformer. The path of the current is shown by bold arrows.

During the Negative Half Cycle in the center-tapped rectifier, the end B of the transformer becomes positive while the end A becomes negative. This makes the D1 diode reverse biased and the D2 diode forward biased. Due to this reason, now the diode  D1 does not conduct current while D2 conducts.

As shown in the figure above, the current starts flowing through diode D2, and through load resistor RL in the lower portion of the secondary by dotted arrows.

Note: During Negative as well as positive half-cycle of the input AC voltage, the current flows through the load resistor RL in the same direction.

The waveform diagrams of the current flowing through the load, applied input voltage, and output voltage developed across the load are shown in the above figure.

A Bridge Rectifier is another type of full-wave rectifier that uses 4 diodes instead of 2. It also does not require any center tapping. As the name suggests, it is a bridge rectifier, so we can already conclude with its name that it uses a bridge circuit.

These 4 individual rectifying diodes are connected in a closed-loop bridge configuration. Another interesting fact about the full-wave bridge rectifier is that it is smaller in size & cheaper in cost. This is because it has no requirement for a special center-tapped transformer makes. 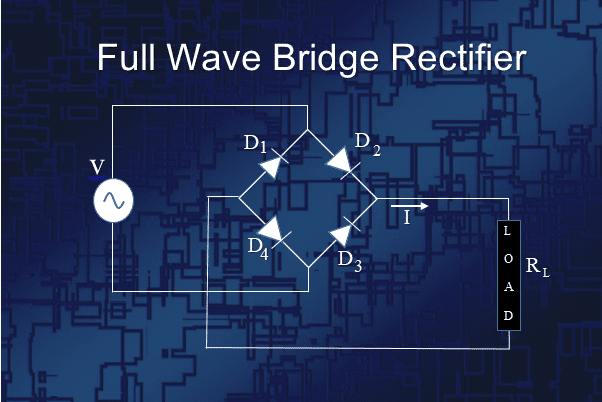 As shown in the figure above, the bridge rectifier has 4 diodes; namely D1, D2, D3, D4.  Out of these 4 diodes of the bridge, only two diodes conduct at a time. Either “D1  and D3” conduct or “D2 and D4” conduct or vice-versa depending upon the positive or negative half cycle fed to the bridge circuit.

Now, let us understand this taking both cases:

You can also watch the video on the Full-Wave Rectifier by Neso Academy for better understanding.

For the analysis of Full wave rectifier following parameters or properties are considered. The different characteristics are explained with derivation equations below in detail.

Ripple factor is defined as the ratio of the RMS value of the AC component to the DC component. Therefore,

This factor mainly decides the effectiveness of a rectifier i.e. smaller the value of this factor, the lesser is the AC component in comparison to the DC component. Hence, more effective is the rectifier.

The Ripple Factor of Full wave rectifier can be calculated as follows:

Idc = value of dc component of the load current

Iac = RMS value of the AC component of load current

So, the ripple factor of a full-wave rectifier is calculated as:

The efficiency of the rectifier is defined as the ratio of DC power output to the input AC power. Therefore,

If rf  is  neglected as compared to RL, the efficiency of the rectifier is the maximum and is given as;

Advantages of the full-wave rectifier are:

The disadvantages of full-wave rectifier are as following: