Pn junction diodes are a kind of basic diodes formed by using two types of extrinsic semiconductors i.e p-type and n-type semiconductors. So that these can show properties of both depending upon the biasing of the circuit.

We have discussed semiconductors in detail with the Energy band diagram if you want to read about it’s working, types and biasing you can go to our detailed semiconductor guide.

In this article though, we will discuss p-n junction formation, Diffusion, Depletion region, and drift phenomenon and basic equation.

What is PN Junction What is the use of PN Junction?

But when these semiconductors are joined chemically i.e. fabricated the product shows different behavior. The electrons and holes get attracted and repelled towards the center according to the power source connection. This results in the formation of the depletion layer and different regions (explained below).

Due to which some properties like resistance, breakdown temperature, breakdown voltage and characteristics, etc get changed and diode exhibits differently according to the biasing of PN Junction Diode. And we can use a single junction for negative and positive both types of voltage supply.

The most common semiconductors we are using for the formation of PN junction are Germanium and silicon because of its electrical properties. Generally, there are several different ways to make a p-n junction. For the ease of understanding, we are explaining it in a simpler way by taking an example.

We usually make PN junction using a single wafer of Pure Silicon or Germanium. For the formation of the p-n junction, we first convert a silicon wafer to a p-type semiconductor by doping it with a trivalent impurity i.e. aluminum, gallium, etc on one side.

This technique is called Fabrication of PN junction which results in the formation of the junction.

At the time of PN junction formation, we observe different phenomena that occur like the movement of the majority and minority carriers, region formation, etc. Knowledge of these phenomenons is very important to understand other topics like VI characteristics of PN Junction (discussed in PN junction diode article, link given above) and different types of diodes and their applications. 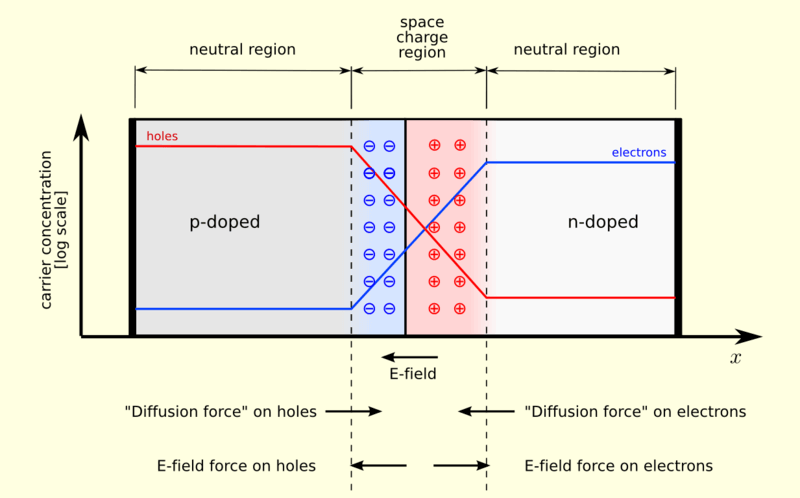 Three important phenomena that occur during the formation of the p-n junction are:

In a silicon wafer when the junction is formed, a movement in charge carriers occurs between p-type and n-type materials due to the unequal distribution of holes and electrons in the semiconductor. This depends solely on the concentration of charge carriers. This results in the movement of electrons from the n-side to the p-side and holes from the p-side to the n-side through the junction.

The region where negative and positive charges get deposited on one of the sides is known as a depletion region. (Read Q-A below to know the full process with diagram)

Let us assume, Ca and Cd are the concentration of acceptor and donor atoms

And No and Po is the equilibrium concentration of electrons and holes respectively.

As per the poison’s equation:

As we know, the total charge on either side of the depletion region must cancel out. Therefore, the multiplication of the width and the concentration on the p side and the n side becomes equal i.e

dp = width of depletion region within the p-side

dn = width of depletion region within the n-side

After the movement of majority and minority carriers, the entire depletion region and potential difference (∆ V) across the p-n junction can be calculated as given below;

But in the depletion region,  the value of No and Po is equal to zero.

Therefore, the total width of the depletion region can be defined as:

where ∆V can be written as ∆Vo + ∆Vext i.e. it is split into the voltage difference into the equilibrium plus external components.

Q1: How is PN Junction formed?

Ans: There are many techniques to form a PN junction. But in the easiest way, it is formed by the doping of a single Pure Semiconductor with p-type and n-type impurities. The process is called the fabrication of PN Junction.

Q3: What is Drift in PN Junction?

Q4: What is a difference between Diffusion current and Drift current in PN Junction?

Ans: There is a vast difference between diffusion and drift current. We will take them pointwise:

Q 5: Does diffusion and Drift current contributes to the total current of a diode?

Ans: Yes, both Diffusion and drift current contribute significantly in the calculation of total current in the diode.